Texas newspaper finds success with new revenue streams In 2019, Maisie Crow and Max Kabat were the new owners of the weekly Big Bend Sentinel in Marfa, Texas. Crow, a documentary filmmaker, and Kabat, a co-founder of a brand and growth consultancy, wanted to discover how to find more money to invest back into journalism instead of depending on the traditional advertising model. Relying on the strengths of their local market (a tourism-based, homeowner-based and service-based economy), the duo introduced The Sentinel, a coffee shop and restaurant/bar. After purchasing a building and renovating it, The Sentinel opened its doors in June 2019. It is comprised of a main space for visitors to relax in, a kitchen, and the newsroom. The kitchen space was rented out to local cooks to serve food throughout the day. According to Kabat, they stopped renting out the kitchen in 2020. By April 2020, they had taken over the food program with their own chef named Erik Quintana. “The Sentinel brings in more topline revenue than from the newspaper, allowing us to invest the profits back into the staff to provide as much original reporting as possible,” Kabat said. Over time, the space has evolved into a genuine gathering space for the community. The Sentinel has hosted weddings and proms, and it now includes a retail shop featuring items such as water bottles, tumblers, coffee, and jumpsuits for sale. But after nine months of success, the COVID-19 pandemic caused The Sentinel to shut down for about six weeks. “It was really disheartening,” Kabat said. “We were finally starting to like we were figuring it out, and then we had to close our doors.” Currently, they are open for outdoor seating and shopping, which has helped keep the newspaper afloat. In addition, PPP money proved helpful as well. Kabat said that while there are many ideas and models out there to help make journalism sustainable, he and Crow are most interested in making the capitalistic system work for publishers. The Sentinel is one way that the newspaper is doing that. However, it is not a one- size-fits-all solution, which is why the pair launched the Broadsheet Ad Network last month, a partnership between the paper and Kabat’s agency, The gooddog. In beta, the network connects publishers with B corporation brands (businesses that meet the highest standards of verified social and environmental performance, public transparency, and legal accountability to balance profit and purpose) to purchase print and online ad space. In the future, the network will add newsletter ad space as well as space on other platforms. “We’re in the first inning of this evolution, trying to build two different businesses separate, but together,” Kabat said. “The success we’ve found thus far has come from prioritizing and fostering our community. They are our reason for being and the most important stakeholder. Every editorial decision made by the newspaper and every business decision by the space has to be about them because no matter how creative we get with new ideas and new revenue streams, if it’s not in service of them, it all falls apart.”—em 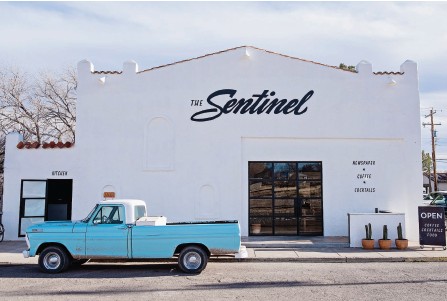