Print advertising is more memorable and delivers better brand lift than social media ads Thinknewsbrands, a cooperative of Australian publishers, has studied advertising effectiveness across media platforms — in its “Benchmark and Payback Series.” In August 2021, the group released a new installment in the series, The Social Chapter, which looked at key indicators and ad metrics, such as short-term and long-term memory recall, and “brand lift” — in other words, how an ad, product or brand is perceived and regarded. They compared these metrics across platforms, including print and digital news, Facebook, Youtube, outdoor advertising, broadcast and radio. The study revealed that advertising carried by news publishers outperformed ads distributed on the social media platforms — Facebook and Youtube, in particular. Print ads, they found, are significantly more memorable than a 6-second Youtube video and are “on par” with 15-second video ads on Youtube. Despite the billions in advertising business Facebook does in a year, the effectiveness of those Facebook ads is questionable, based on the group’s analysis. “Irrespective of the Facebook ad type, ads in newspapers outperform Facebook by up to 4x,” Thinknewsbrands found. Though narrow and specific to Australia, the study’s findings come at a time when Facebook’s North American user base is in flux. Geoff Desreumaux, CEO and editor-in-chief of We are Social Media — an independent publisher of digital marketing news and analysis — wrote about the platform’s user base in January 2021. “Facebook has a problem,” he said. “Not one that will impact its business in the short term, but a growing concern for its future. During the fourth quarter, Facebook reported $28.07 billion in revenue. But while its global user base continued to grow, with 1.84 billion daily active users worldwide, there are serious signs of user fatigue in some of its core markets — the United States and Canada, where daily active users dropped from 196 million in the third quarter to 195 million in the fourth quarter.” Advertisers have begun to express their concerns and frustrations with Facebook publicly. In 2020, a “boycott” saw big-brand advertisers like Coca-cola, Unilever, Verizon and others pump the brakes on Facebook advertising because of the platform’s inept attempts to quell hate speech and disinformation. Elon Musk decided that his businesses, Tesla and Spacex, would no longer have a presence on Facebook back in 2018. Tesla reportedly spends nothing on advertising, and Spacex plans to get into the ad-publishing business in outer space. According to a Business Insider report, Spacex is linking up with Canadian start-up Geometric Energy Corporation to launch a satellite and digital display into orbit. By paying with cryptocurrency, clients will be able to buy ad space (pay-by-pixel), and viewers back on Earth will be able to follow along online. Meanwhile, print advertising, especially in newspapers, continues to be accessible, and according to the Australian study, simply more effective than digital ads on social media platforms. “Social media is simply no alternative to news,” the Thinknewsbrands authors concluded. “News has strong reach, superior trust, memorability and business impact.” — GAP 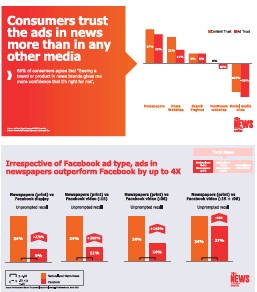