A new study finds trust in news depends more on the public’s moral values than ideologies America is often described as a country constantly reinventing itself. If this is correct, then loud and often violent discourse is the forge of that reinvention. Journalists of all stripes and persuasions report on the issues feeding the forge’s fire but do so according to a set of journalistic core values. In a comprehensive 2021 study from the Media Insight Project, a joint effort of the American Press Institute and The Associated PRESS-NORC Center for Public Affairs, five core journalistic values were selected as the basis of the study: oversight, transparency, factualism, giving voice to the less powerful and social criticism. Researchers then explored how these journalistic values intersect with fundamental moral values. “The study’s primary conclusion is instead of seeing trust or mistrust of journalists according to people’s identification with a certain political ideology, their level of trust may be better understood through their general moral values,” said Kevin Loker, director of strategic partnerships and research, American Press Institute. “We hope the study deepens conversation about this issue of public trust of journalism. The data and conclusions can help journalists, editors and publishers begin to adapt their approach to reporting and writing news to reflect people’s moral values better by considering how these values align with the core principles of journalism,” added Loker. “In general, people who emphasized moral values of care and fairness more fully embraced those values. People who emphasized moral values of authority and loyalty supported journalism values but not as strongly.” The Project surveyed a carefully selected number of Americans to assess their agreement with these core values and found that only 11% of Americans fully support all five principles. However, upon a more in-depth analysis of their answers, some unexpected insights were revealed. Few core values are more critical to journalistic integrity and public trust than factualism or accurately reporting facts. This is the only value of the five that a majority (67%) of survey respondents said they supported. Somewhat surprisingly, the smallest percentage (29%) supported “a good way to make society better is to spotlight its problems.” As they analyzed the responses from study participants, researchers identified four distinct groups, with each sharing similar moral values and supporting the core values of journalism. • Journalism Supporters are liberal and mostly Democrats, but also the smallest group at only 20%. Caring for others and fairness were the moral values of most significant importance to them. • Upholders represent 35% of Americans and are primarily Republicans, but the other half are Democrats and independents. They highly value authority and loyalty and tend to think journalistic practices hinder officials from doing their jobs. • Moralists (23% of Americans) are more likely to support all five of the core values of journalism. They are more diverse by age, race and political/ideological identity. They trust news and its accuracy but also are very skeptical that the news reflects their perspectives. • Indifferents are 21% of Americans and are more likely to be cynical of journalistic values and news accuracy. They also represent most political/ideological views but more identify as moderates than the other three groups. More information and additional links about The Media Insight Project are available at: https:// www.americanpressinstitute.org/ publications/reports/survey-research/ trust-journalism-values/. — BS 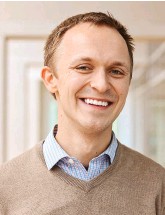