Following the 9/11 attacks in 2001, our country was forever changed. The Photo of the Week from October 22, 2001, entitled “Keepers of the Gate,” was photographed by Matthew Minard from The Times in Shreveport, LA. The photo was of the National Guard troops stationed at the Shreveport Regional Airport saluting during the national anthem for their changing of the Guard. The caption continued to read, “Troops are stationed at many airports around the United States in the wake of the Sept. 11 jetliner attacks and further threats.” 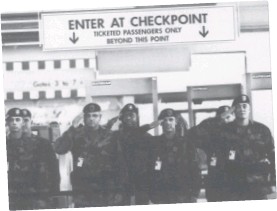