Our goal with the annual Newspaper Sales Compensation Study is to identify significant shifts and trends. With COVID still present in our lives, we added several new questions to the 2021 survey. Responses came from 45 companies across 44 states and Mexico, with strong representation from all size markets. Small markets serving a subscription base of under 15,000 were the top reporting group. The study was cosponsored by Editor & Publisher and America's Newspapers. The first thing that jumped out at us is that more newspapers utilize separate sales staff for digital. We saw a rise from 5.8% to 19.8% reporting that they have separate digital sales teams and 43.8% that they employ a digital specialist. The digital platform with the highest amount of active selling is mobile, with 40.7% of respondents indicating they are using their newspaper's mobile app to generate revenue. Streaming came in at 30.9% and podcasts at only 16.7%. The average size of sales teams remained relatively constant, with fewer respondents having only one to four sellers and most having five to eight. We found this somewhat surprising, given that a significantly high number of smaller markets reported growth in their sales staff, jumping from 7.6% in the 2020 study to 25.3% this year. The study also revealed a slight increase in part-time sellers, up from 21% to 29%. A major difference that we saw in the makeup of sales teams was the high number of 20- to 30-year-olds that newspapers added to sales teams, jumping from 1.8% to 7.4%. However, on the other end of the spectrum, newspaper sellers are steadily aging with 24.7% over 50, up slightly from last year. More companies offer new sellers a 90-day guarantee, up from 46% to 64.2%. However, newspapers that provide a one-year guarantee grew from 4% to 13%, lower than what we also see across other media. Most companies stated that an entry-level seller earns an average between $20,000 and $40,000 a year, and we saw a big jump in their ability to make more. For example, in the 2020 study, no company reported entry-level sellers earning upwards of $110,000, while this year's study showed 1.9% of entry-level sellers earning between $110,000 and $150,000 annually. In addition, there was an increase of new sellers earning between $60,000 and $80,000. Established sellers’ "base plus commission" remains the strongest compensation model for sellers. Only 10.5% of respondents stated they pay 100% commission. We see this as a positive move to recruiting a higher level of candidates, and we hope that trend will continue. Comparing average and highestearning sales reps, the most notable changes — especially during the pandemic — was that the earnings for both categories showed an increase in both the $60,000-$80,000 and $80,000-$110,000 ranges. The number of higher-paid reps doubled in the $150,000-$200,000 range. Helping clients succeed is a top draw to a sales position. However, not having an overall understanding of the position remained a principal reason for departing, along with the opportunity to earn more money elsewhere. Overall, the newspaper seller position is still a strong career choice. To review the complete study, visit www.mediastaffingnetwork.com (under Compensation Studies). We thank all who participated. 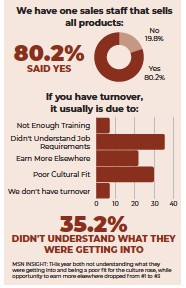