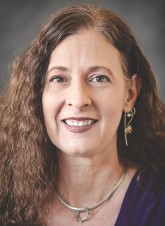 Cynthia Miller was nominated by a colleague who said, “Cynthia does a magnificent job of doing the most essential function that an editor can do — she makes the people around her better. Cynthia asks hard questions of her reporters and demands that they do the same with their sources. In recent years, Cynthia has played a pivotal role in our ‘10 Who Made a Difference’ campaign, which recognizes the volunteer work of people in our community. She worked with the city’s mayor to recognize these volunteers in front of thousands of people, linking the newspaper’s work to the lives of the community. I’ve known Cynthia for more than 15 years and have watched her develop over time. She’s an asset to our company.” What advice do you have for other young professionals who aspire to become an editor extraordinaire? I think of myself as an accidental journalist, derailed from a career in fiction writing by an unexpected fondness for the stories found in a community. Yes, we are watchdogs, but we are also informers, entertainers and excavators. I’ve learned that you must love the place and people you serve and develop an obsession for telling their stories well. But don’t expect them to love you back. I’ve heard editors fondly refer to a hardworking reporter as “The Machine.” Avoid this. Keep your standards impossibly high, but be aware that good reporters are human — and increasingly difficult to replace. Get a cat instead of a dog. What has been your proudest moment as an editor? Two proud moments come to mind, both in 2021. I rarely get jazzed about awards, but in late October, when our reporters swept a number of New Mexico Press Association awards for work they had done in tough pandemic-era conditions, I was in awe of a team that had triumphed amid the unrelenting pressure I had put on them. And in December, as I took the stage at a holiday event in downtown Santa Fe to applaud the selfless work of 10 community volunteers honored by The New Mexican. I was proud to have a role at a newspaper with a long history of engaging the community in such a personal and poignant way.