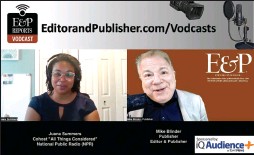 New co-host of NPR’S “All Things Considered” is a new voice of inclusivity Preparation and experience are critical elements to any career advancement, but history can also contribute. Juana Summers, the new cohost of NPR’S “All Things Considered,” has prepared herself and gained the experience to step into this historical moment of more focus on inclusivity at all news organizations — including NPR. She shared her story and perspectives with Mike Blinder, publisher of Editor & Publisher, during a June 2022 E&P Reports vodcast. Summers was convinced she would pursue a career in journalism from age 13. A freshman high school journalism class planted the seed which she nurtured by reporting for her high school newspaper. “I was intrigued by the idea that someone would pay me money to be nosy, ask people questions and then write their stories,” Summers said. Being born and raised in Kansas City, Missouri, Summers had one of the most prestigious journalism schools in the neighborhood at the University of Missouri. Her first experience in public broadcasting was as a college intern at KBIA in Columbia. With Jefferson City, the state capital, just down the road, much of her early reporting was about politics and policies. It was and remains the beat that interests her the most. “I wanted to learn about how politics works and doesn’t work, especially for under-represented people and communities, and then report their stories to enlighten all citizens and politicians to their needs,” Summers added. Summers had previously worked at NPR reporting on Congress during 2014–15, left for new opportunities at CNN, Politico and The Associated Press and then returned to NPR to cover the 2020 election cycle. “I certainly enjoyed covering the 2020 election, but I knew that wasn’t my long-term focus,” Summers said. “I benefited from very understanding editors who asked me about my next career aspirations. I wanted to dig deeper into the salient cultural issues of our times. They helped me create a new beat at the intersection of politics and justice and gave me the latitude to cover those stories.” Summers said she is very excited about NPR’S commitment to promoting more inclusivity for people of color to occupy major reporting roles. She knows that more effort is needed to keep those people and understand why they leave. She is also encouraged that NPR is willing to report on its inclusivity shortcomings freely and without the scrutiny of editors and management. “I enjoy mentoring journalists and journalism students of color,” Summers said. “They are very motivated to succeed as I have, and many have the local experience to advance to the next level. It’s the responsibility of ownership and management of bigger news outlets to give them an opportunity and benefit from their talent and experience.” What does the new co-host of “All Things Considered” do to alleviate the stress and keep fit? Become a weightlifter, of course. It is another of Summer’s passions, and she has earned her certification as a Level-1 weightlifting coach from USA Weightlifting. That challenge is analogous to the weight she now gracefully bears as a symbol of inclusivity and exceptional journalism at NPR.